Color Out of Space

Color Out of Space is a cross-pollination of the sensibilities of its director, the South African Richard Stanley, and those of American author Howard Phillips Lovecraft. For the last thirty years, Stanley’s has come to be known as a distinctly tactile fiction -often addressing the trials of the body when presented with harsh environments, while Lovecraft’s is famously known as fiction that can only exist in a reader’s imagination in that the horror of his stories are inconducive to a concrete ‘image.’ Lovecraft is, in a sense, an ‘unfilmable’ author, yet in Stanley’s film adaptation of his 1927 short story, he demonstrates how his visual style at once lends itself to and contradicts Lovecraft’s oeuvre. The film made its world premiere at the Toronto International Film Festival’s Midnight Madness program, following a month of delight and intrigue on the part of both devotees of Lovecraft and of fantastique cinema at large, given that Color is Stanley’s first fiction feature in over twenty years.

Lovecraft’s story follows strange events after a meteorite has crashed into a sparsely-populated valley that has been slated to be flooded in order to build a dam. In this meteorite the local people along with researchers from a nearby university discover a ‘globule’ that gradually contaminates the land’s soil and inhabitants with a kind of alien poison. Animals run away, crops fail, flesh shrivels and disintegrates, a farmer’s wife slowly goes mad. The story was influential, and arguably a basis for J.G. Ballard’s The Crystal World (which in turn begat James Vandermeer’s Annihilation) in how the alien presence seems to slowly spread over time and gradually consume the landscape, and for Stephen King’s Pet Sematary and The Tommyknockers in its depiction of a sinister force that compels its victims toward their deaths. There have been at least three direct film adaptations of Lovecraft’s story: Daniel Haller’s Die, Monster, Die! (1965) being the earliest (and one of the first of any Lovecraft tale) and featuring a menagerie of mutated animals, Huan Vu’s Die Farbe (‘The Color,’ 2010), filmed entirely in black and white save the alien color, which appears in a bright magenta, and Patrick Müller’s five-minute experimental production from 2017. Variations of Lovecraft’s tale appear in George Romero’s The Lonesome Death of Jordy Verrill (1982), written by and starring Stephen King, and David Keith’s The Curse (1987).

Like the passages for which Lovecraft is best known, the grotesque in Stanley’s film is largely implied. Lovecraft would often allude to the threat in his works as a kind of sublime event that cannot be understood by the mind -which is conditioned to parse the world through language- and thus cannot be adequately described with language. Consider how the author merely connotes horror without denoting it in a scene from Color where the farmer looks in on his wife, recently driven insane by the alien color and who he keeps hidden in an attic:

When he did enter he saw something dark in the corner, and upon seeing it more clearly he screamed outright. […] As it was he thought only of the blasphemous monstrosity which confronted him…

Stanley suggests the alien threat through photography -using tinted light and the optical effects seen originally in Hardware (1990) and The Sea of Perdition (2006)- and uncanny images happening in the margins -mantis-like creatures who have tentacles in addition to limbs, flora and fauna that seem to glow in broad daylight, a bulbous invertebrate creature that appears through a shower drain. Stanley’s film retains the short story’s consciousness of environmental decay as the result of shortsighted urban development and infrastructure failure, the characters’ necrotic rashes and lesions suggesting recent disasters in Fukushima, Detroit, and Puerto Rico. The final scene in the film is a series of wide shots of the newly constructed dam, suggesting that Lovecraft’s fantastical alien threat to his human characters could serve as an analog for humanity’s technological threats to itself.

The viewer may cross-pollinate this with the rediscovery of Lovecraft’s oeuvre in the past twenty years, in which the author’s works were included in a volume for the Library of America collection in 2005 while at the same time readers have addressed the author’s latent contempt for rural people and for ethnic and racial minorities. Color Out of Space is not unlike most Lovecraft stories with a rural setting in that the narrative contrasts an urbane, educated character -a scientist, a doctor, etc.- who works at his fictional Miskatonic University and a bucolic, uneducated one -a farmer, a merchant, etc.- who he often depicts through dialogue as a bumpkin. One is tempted, then, to view the casting of black English actor Elliot Knight as the scientist Ward and Nicolas Cage as the farmer Nathan as a kind of corrective to the bigoted undertones that occasionally appear in Lovecraft’s fiction. In that regard, on the surface the narrative resembles Romero’s Night of the Living Dead (1968): Ward is soft-spoken, smart, and resourceful; Nathan is loud, awkward, and impulsive. The film also makes its self-awareness known in a scene where Ward reads a copy of the 1907 novella The Willows by Algernon Blackwood, an author Lovecraft admired and called in his 1927 essay Supernatural Horror in Literature an “unquestioned master of weird atmosphere.”

The film has been touted as Richard Stanley’s return to feature filmmaking, which hasn’t occurred since he was dismissed from directing The Island of Dr. Moreau (1996). Since the mid-1990s, however, he has made several documentary works, often addressing popular myth, religion, and the occult. He has also demonstrated his preoccupation with unseen and often supernatural forces -radioactivity in Hardware, a shapeshifter is Dust Devil (1992), esoteric societies that emerged under fascism in The Secret Glory (2001), or the loa of rada voodoo in The White Darkness (2002)- as well as with corrupted landscapes: Just as the protagonist of Die, Monster, Die! suggests that uranium may be the cause of that film’s mutations, the ‘blasted heath’ of Color is perhaps not so far thematically from the post-nuclear wasteland of Hardware or the months leading up to the 1989 Battle of Jalalabad -with Afghani fighters using weapons provided by the United States- in Voice from the Moon (1990). It may be worth noting that as early as 1979, Stanley’s native South Africa for a time became the continent’s sole nation to ever develop nuclear weapons. 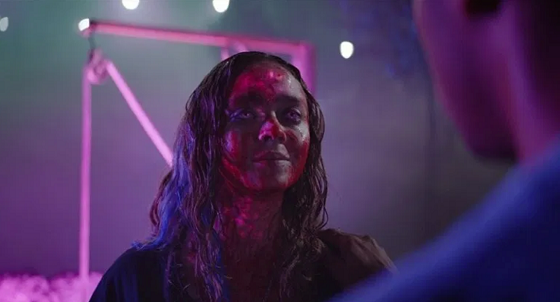 Lavinia in Color Out of Space.

Many of these elements converge in Color Out of Space. Stanley’s film updates Lovecraft by introducing his skepticism of technology, with televisions and cel phones producing strange images and noises. The film departs from Lovecraft with his introduction of the occult in the character of the farmer’s daughter, Lavinia (Madeleine August), who practices wicca and believes from the start that events set forth by the meteorite are, in Lovecraft’s words, “not bound by science.” Unique to Stanley’s film is the incorporation of chimeric images from ancient myth in his visualization of Lovecraft’s ‘indescribable’ horrors. The film’s titular color causes bodies to merge and mutate into creatures that resemble a jorogumo -a spider-human hybrid of Japanese folklore. Stanley’s creatures also recall Gustave Doré’s illustration of Arachne in the 1867 edition of Dante’s Purgatorio. According to the myth, Arachne was a boastful weaver who is transformed into a spider by the goddess Athena. In the film, Nathan’s wife Teresa (Joely Richardson) works as a financial advisor -a ‘modern’ occupation if placed in a binary opposition to that of a farmer- that depends largely on the manipulation of artificial markets or, barring that, creating new ones. With that and the landscapes of Stanley’s previous films in mind, one might take the effects of the globule -which causes Teresa to mutate into a giant arachnid- to represent a kind of hubris for humankind’s systematic exploitation of its environment. 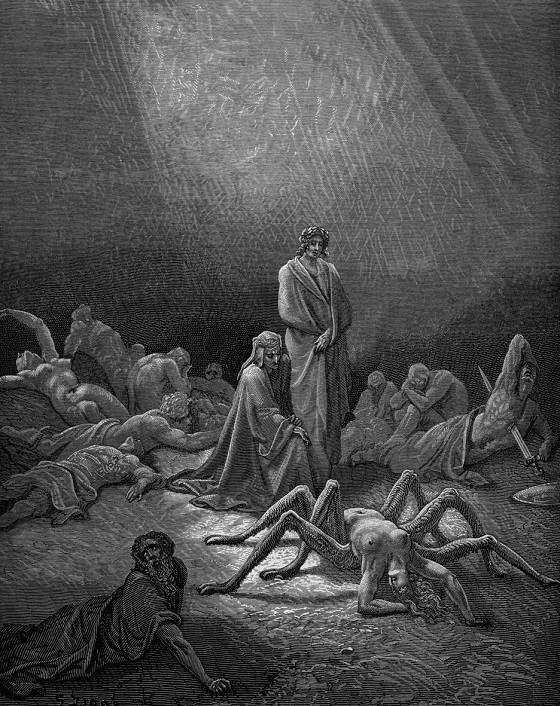 The “inherent disparity of the world sets mythic thought in motion,” according to Claude Lévi-Strauss, who in saying so suggested that the binaries one applies to the world -human and animal, urbane and rural, science and magic, and so on- form a basis for the preconceived notions x has about (not)x -myths being their natural extension. In the case of Lovecraft, the binary between x and (not)x is often left incomplete in that the horror of the story resides in the narrative’s inability to describe such horror to the reader. While this aspect of Lovecraft’s fiction almost necessarily eludes film adaptation, the binary between humanity and (not)humanity manifests itself visually using grotesque mythological tropes in those adaptations, such as the medusa in Daniel Haller’s The Dunwich Horror (1970) or the eel-like creatures in Stuart Gordon’s From Beyond (1986). Filmic interpretation of Lovecraft’s fiction, then, is fundamentally different from that fiction, becoming something of a chimera itself almost by necessity.

The Sea of Perdition.

Lavinia in Color Out of Space.

Written By henri-de-corinth On 18 settembre 2019